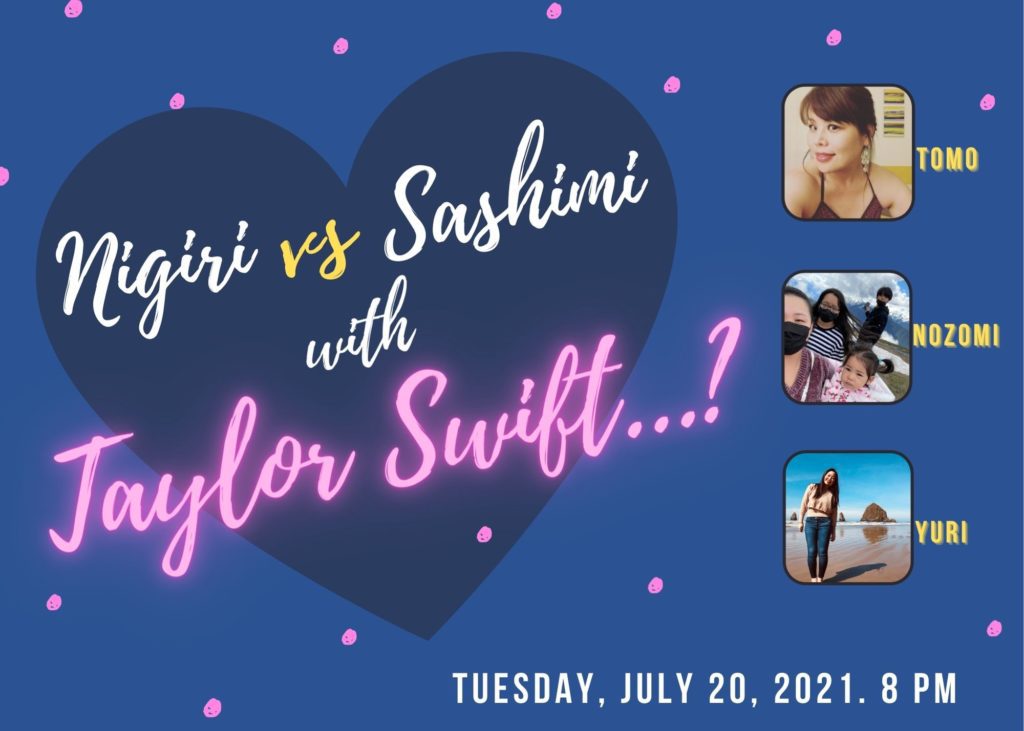 This time, my goal was basically to connect “Sushi” with “Taylor Swift”

So I’ll be introducing you the process I went through, in hopes to make this happen!

The first thing that I did was of course, hop on Google to see if there were any times when Taylor Swift talked about sushi. And here’s what I found:

But I can’t just end the blog there, can I?

So I went on to research more about her experience with sushi, and I found a couple instances where she had gone out on dates with her fellow celebrities to grab some sushi (regardless of whether she enjoyed it or not.)

And here is what I found out… There are actually a very large number of Americans who don’t enjoy sushi! What a shame.

So that’s when I finally decided on the topic of this blog: why do some Americans (including Taylor Swift) not enjoy sushi??

As we welcome you back into our dining areas, we remain fully committed to following all safety guidelines and recommendations set forth by state and local health authorities. Please feel free to call us at 206-453-3881 📞 with any questions or concerns prior to your visit.

A large part of the disliking specific foods seems to come not from the taste, but from what it is. Sushi often comes raw. Although it may seem normal for some cultures to eat raw ingredients, it’s hard for some people to get their head around that fact. In a sense, some people may see eating sushi as eating raw meat.

So delving further into the topic of distaste, it seems that according to this article, one of the main reasons that people dislike certain food comes from the origin of the food, rather than its actual taste. In a more extreme example, many cultures eat insects as a source of protein. However, many western cultures would try to avoid them. Even the thought of bugs touching other food would deem the dish inedible, right? Even if the insect were completely sanitary, people would still not eat it.

There also seems to be the factor of upbringing. For example, people often associate negative experiences with food. As a child, if you feel sick because of something you ate, have an allergic reaction to a specific food, or are forced to eat something you don’t want to, that experience sticks and you grow up to often dislike that food.

Ten Sushi is committed to support local individuals and businesses by maintaining constant quality of food and services in the safest and healthiest ways possible. Your success is our ultimate success!

All of that aside, we understand that sushi is not for everyone (including Taylor Swift.) But at the same time, these kinds of mental barriers are not irreversible! The most common example is spicy foods. as a child, spicy foods are not “enjoyable” at first. However, once you expose yourself to spicy food multiple times, your body basically begins to understand that you won’t die from eating spicy foods, and before you know it, you’ll be pouring Tabasco sauce on every dish you eat! Sushi will be the same deal for those who have a mental barrier in eating raw fish; as soon as you realize that raw fish is safe, you’ll be coming to Ten Sushi every day!

Even after that, you’re still struggling? No worries, we’ve got you. At Ten Sushi, we offer plenty of dishes that aren’t raw! We offer prepared dishes for those who want to get into sushi, or simply want to try something different from the usual raw dishes. Our goal is to catch the attention of the broader audience after all. Maybe some day, we’ll be able to convince Taylor Swift on how amazing sushi is!

We have locations in Seattle and Queen Anne, as well as our newest Location in Factoria. Please stop by to try our dishes! And don’t worry if you aren’t the biggest fan of sushi; we won’t dissapoint!

Join our vip members to receive coupons and event information!

Have you ever had a California roll with real crab? Our Real Crab California Roll

How the fish for sushi is procured changes the taste drastically. Tuna, salmon, cod… what